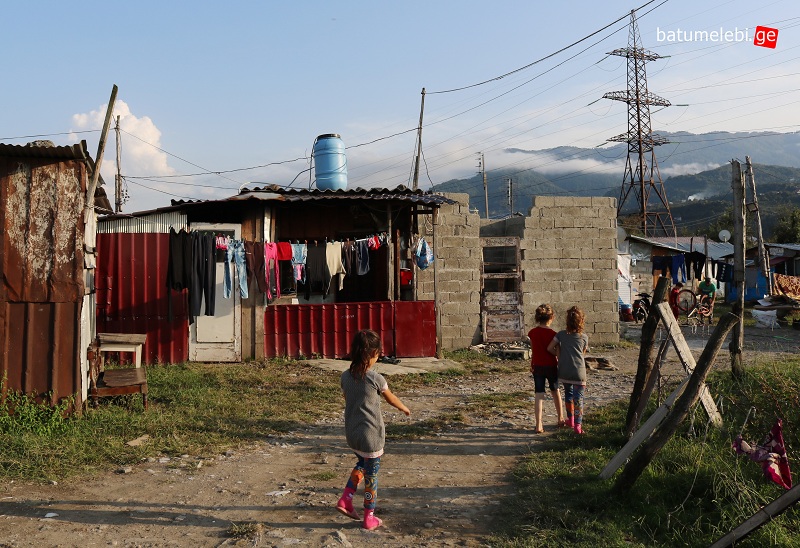 Phridon Khalvashi street, 9th Lane, former 25th battalion – This is the official address of more than 200 children living in an arbitrarily settled settlement in the annexed territory of Batumi. Their parents have been settled here for the sixth year. Some fled from poverty, some from homelessness, and some from a landslide and built a hut on the territory of the former 25th battalion.

Children living in poverty do not have access to full nutrition. The majority of the residents of the former 25th battalion in the suburbs of Batumi have the status of socially vulnerable and their main income is the allowance that the state pays them. The diet of children living here is directly tied to the menu of free dining facility. Children know by heart the menu, and also when what dish will be on their table. No one loves Monday, because Monday means a cutlet for them, which kids do not eat. They love Tuesday because Tuesday means that the sausage is on the menu of the free dining facility, the most delicious food for kids. 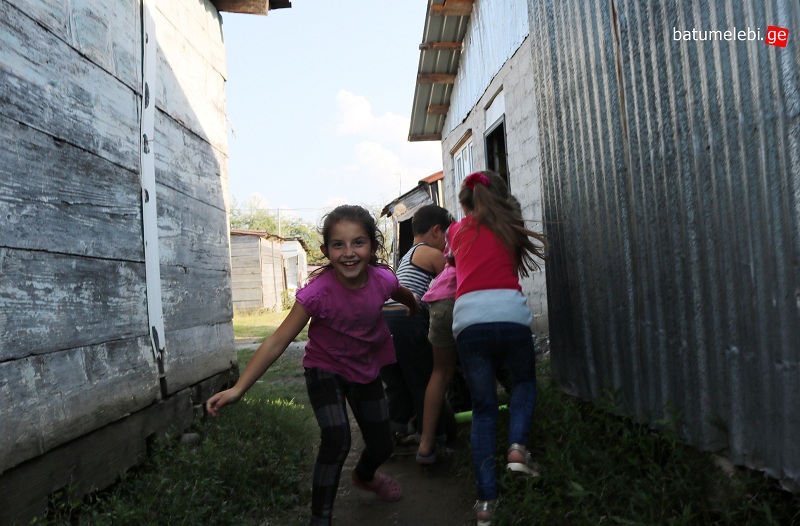 Lora knows every nook and cranny of the 25th battalion. The place where the huts and the concrete rectangle houses are built is swampy. Some huts are attached to each other, between them there is only a narrow passage. With Lora and her “squad”, we have visited every family, where the minor children live.

So, what do children eat when they return home after school: For some, it’s lunch, for some it’s dinner, because they study in different shifts and eat food at different times. 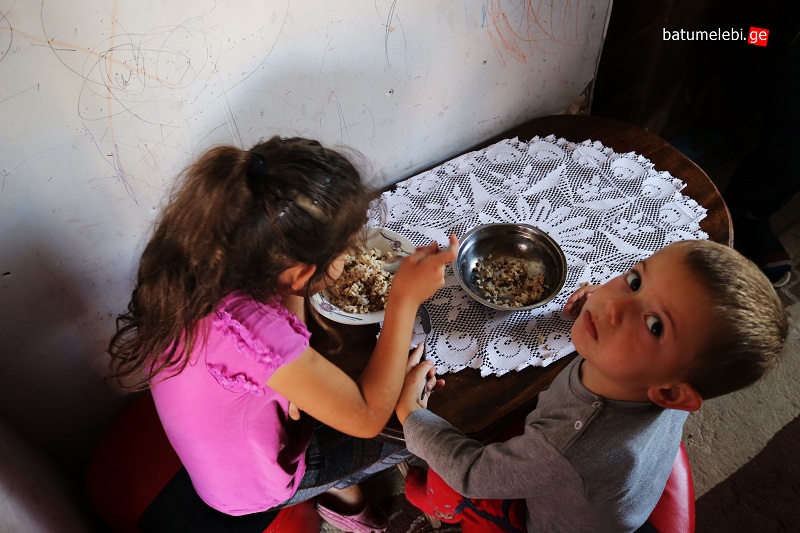 Lora is 7 years old, her brother Mate two years old. Their lunch is a pilaf with meat brought from the free dining facility. Laura’s family is one of those three hundred families who live in the settlement of the 25th battalion in Batumi. Lora says that she does not have a special dish because she “loves everything”. 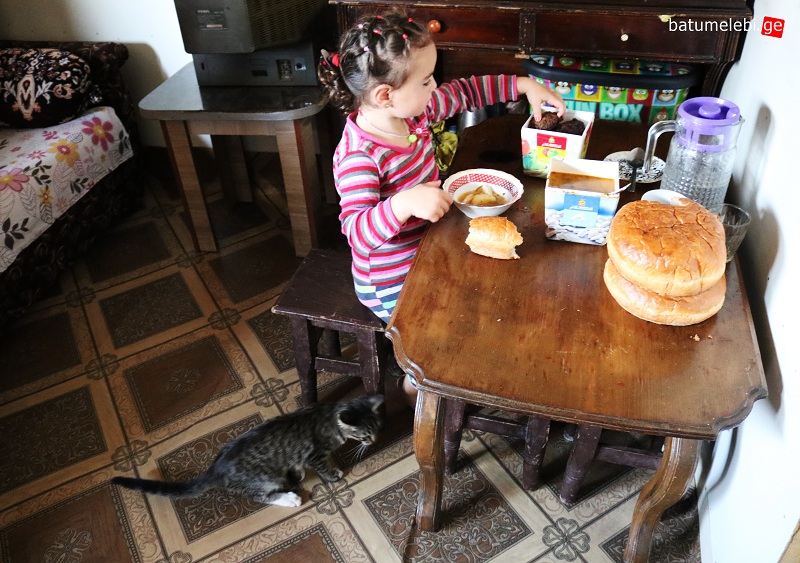 Luna is three years old. Her dinner is pasta soup, bread, and cutlets. Luna does not like the cutlets, as any of child from a settlement with whom I met. Instead, Niko loves the cutlets – Luna’s cat. They are friends. The cat is waiting at the door the returning of Luna from kindergarten, and then, at the dinner table, she waits for her share of the cutlet. I met Luna on Monday. Luna says she loves Tuesday the most. On Tuesdays in the social canteen, from which her family brings food, there is a sausage on the menu. Luna’s family gets three sausages. There are four members in Luna’s family, but her sister is small yet. For children under the age of 3, no free dining food is provided. Luna says that her father and mother doesn’t like sausages, so all of them remains for her. 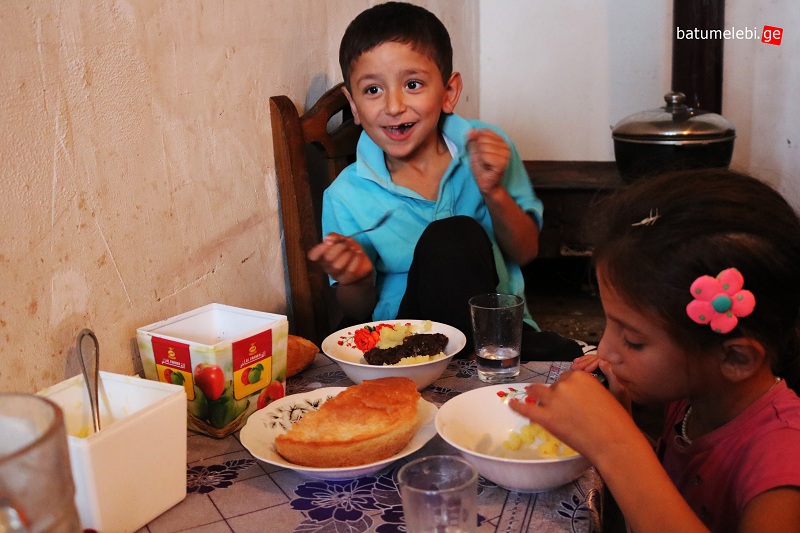 Otiko is 6 years old, Diana 8 years old. After returning from school for dinner they have cutlet and mashed potatoes. 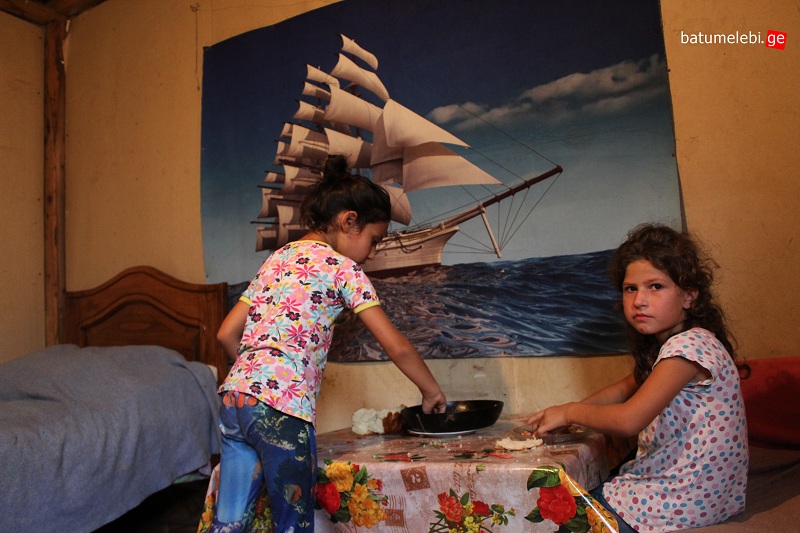 Nino and Mariam are cousins. Both are raised by the grandmother. Their dinner is bread and fried eggs. 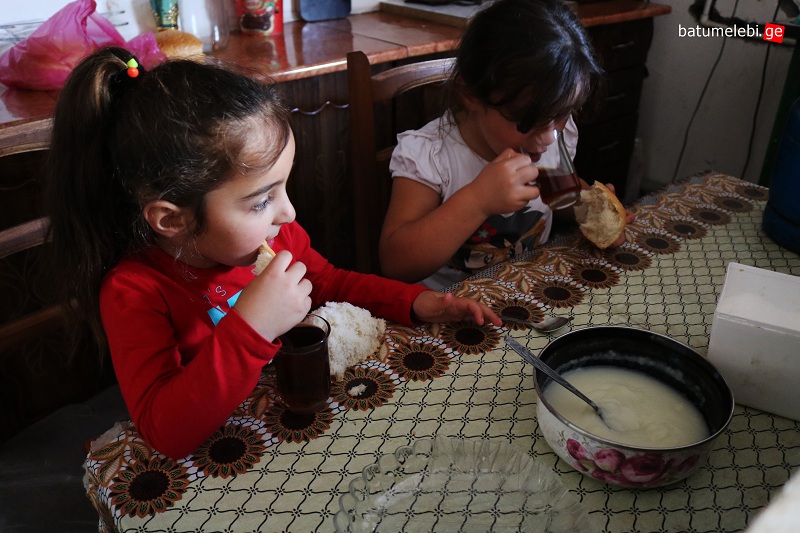 Khatia is five years old, Marika is 6. Their dinner is tea and bread. As well as porridge, which children do not really love. Their mother, Inga, says that she does not receive social allowance because she has obtained “high scores” as a result of inspection by the social agent. Inga says that neighbors often give them leftover food – these families also receive food from the free dining facility. 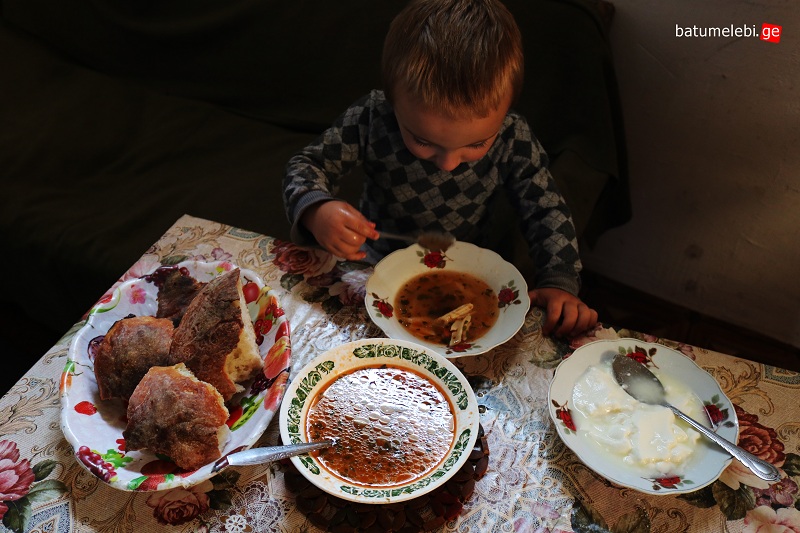 Dachi is three years old. His dinner is bread, pasta soup and matsoni (milk product similar to yogurt). At home, they also have cutlets that Dachi is not very fond of and rarely eats. 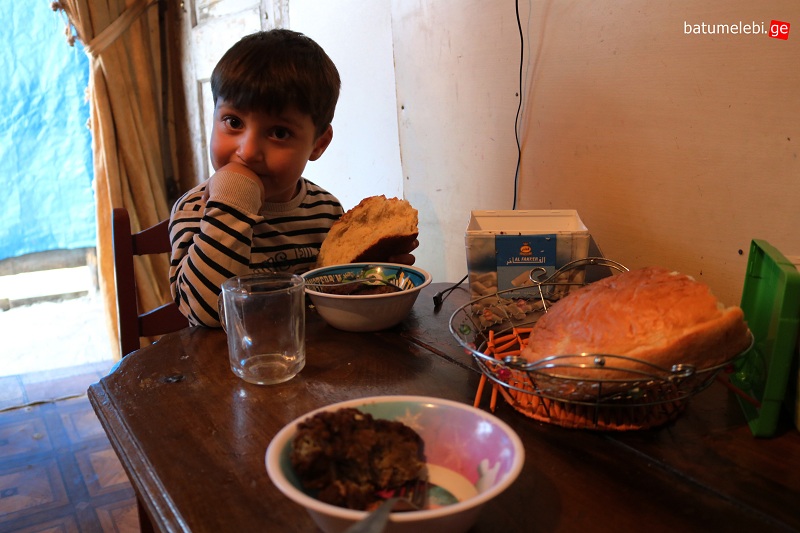 This is Enrique. Recently returned from school. His dinner is the same as of the other children’s – cutlets and mashed potatoes. 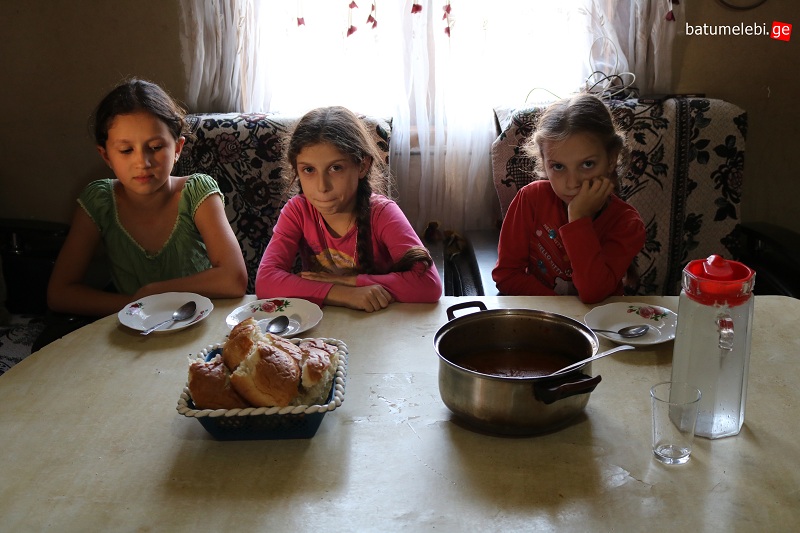 Returning from school Ana, Mariam, and Maka, have soup and bread for dinner. 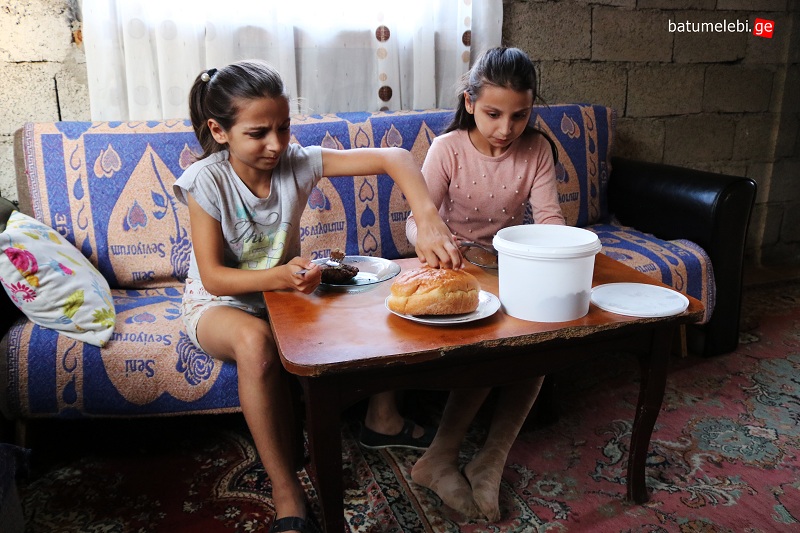 Aneta and Lizzy are 9-year-old twin sisters. Their favorite food is bread dipped in beaten egg and fried in butter and potatoes. Also the pasta. But at home for dinner they have cutlets and bread. Aneta likes banana the most. Girls say that the last time they ate bananas “in last year”.

According to unofficial data, about 600 families live in the former 25th battalion territory. Among them, 300 minors. 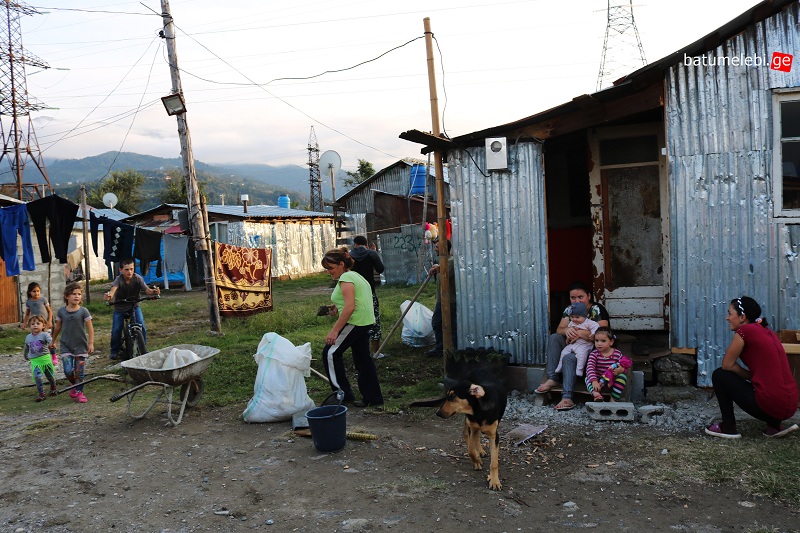 The Laz people in two countries and the language that disappears 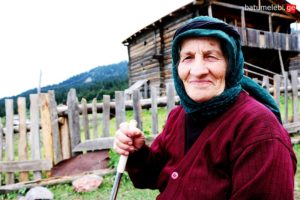 “Why did I fail to study?” – women from the mountains